Gorakhpur is a city that has its roots in days of ancient past, with religious and spiritual significance being attached to virtually every corner you might visit. The city is well known for its many religious monuments, and one of its famous structures is the Imambara. Also known as the Abode of Imams, this monument and religious place has international acclaim and draws many tourists to it throughout the year. 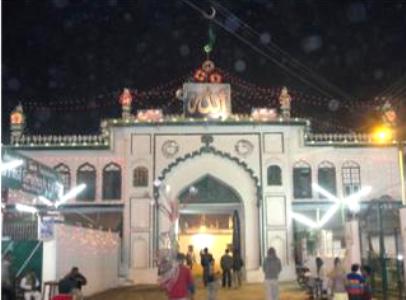 Imambara is one of Gorakhpur city’s oldest landmarks, dating to the end of the eighteenth century when the first Mian Sahib of Gorakhpur, Syed Raushan Ali built it. Known to be the abode of the Imams, the estimated year of completion of the structure is said to be 1717 AD.

Syed Raushan Ali is revered as a Muslim saint, and was the son of a native of Bukhara, Syed Ghulam Ashraf, who later on settled at Shahpur. Inheriting a great deal of land at present day Mian Bazar from his grandfather, Syed Raushan Ali came up with the idea of building an Imambara here. Later on, in 1796, there was funding for further work, and an enclosure was added to the existing main Imambara, as well as a few more edifices.

While a visit to Imambara is well worth it throughout the year, it is a great place to visit especially during Moharram, since the procession begins from here. The silver and gold Tazia that are kept here have achieved much renown. A smoke fire known as Dhuni, is preserved at Imambara, constantly.

Throughout the year, thousands of believers throng to the Imambara to get the blessings of Syed Raushan Ali. This place has also been the seat of Sufi for over 300 years. Throughout time, the core concepts of its inception have been preserved, both in the monument itself as well as its tradition, and the Imambara is an undisputed attestation to India’s rich history as various kingdoms came and went and left their mark on its culture.

How to Reach Imambara

Imambara is located at an approximate distance of 3 kilometers from Gorakhpur City Railway Station, on the Maya Bazaar Road. It is open throughout the week, from 6 am to 5 pm and can be reached by hiring a cycle-rickshaw or an auto-rickshaw from any part of the city. There are many local city buses as well that ply to the area in which Imambara is located.