Epitomizing the identity of the city, the Gorakhnath temple is one of Gorakhpur’s most prominent tourist attractions. A monument of undoubted antiquity, this famous shrine of Mahayogi Guru Gorakhnath spreads over 52 acres of land. Situated in the older part of the city, it is at the Gorakhpur Sunauli national highway, at the Nepal border. 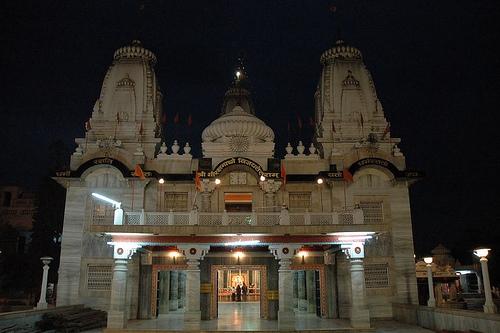 Just like the city itself, the Gorakhnath Temple is named after the Hindu saint, yogic and ascetic, Guru Gorakshnath of the "Nath Sampradaya". It is said that this place is where the great Guru performed tapasya, or penance. While there was originally just a shrine devoted to the austerities of Guru Gorakshnath, over the years this shrine has metamorphosed into one of India's most famous temples and centres for religious activity.

Dating back to the twelfth century, this magnificent temple is an architectural marvel and the center, or Peeth, of the Nath sect. Amidst this vast temple are a number of smaller temples. The main temple rectangular in shape and its large hall is supported by round pillars. The sanctum of the temple has an idol of Guru Gorakshnath on a white marble platform in meditation posture. Beside this meditation site is the Guru's footwear. A visit to this temple will reveal walls inscribed with verses of Guru Gorakhshnath that have been treasured through time. To the south-east of the temple is the sacred pond, Mansarovar. While it was originally used primarily for bathing, it has now been converted by the temple authorities into a boating place.

Over the centuries, the shape and structure of the temple has undergone many changes. However, its original shape has been retained and it was rebuilt in 1896 after attempts to demolish it during the reign of the Mughals. In later times, Mahant Aweiydya Nath and Mahant Digvijay Nath gave the temple a new look and refurbished it, and this is how it stands today.

The Gorakhnath Temple is the center of the Nath Sect and attracts pilgrims all the year round. However, the busiest days are Tuesdays and Saturdays when there is increased activity here. The tomb (samadhi) of Guru Gorakhsnath and his prayer seat (gaddi) are two of the major attractions to devotees who throng to this temple. Prayers are performed thrice each day - at the start of each day, during mid day and in the evening.

This temple is a tourist's delight as well as a popular pilgrimage all the year round. It is also a place of worship for the residents. Surrounding the Gorakhnath temple area are shops that provide items for worship, along with eateries for visitors and devotees. The Dharamshala within the temple campus is also a boon for visitors from outside the city, and is managed by the temple committee.

The Makar Sankranti Mela is the temple’s main festival and commences on the 14th of January each year. This festival marks the start of the zodiac sign Capricorn, also known as Makara Rashi, when the sun makes its transition. It is also viewed as the first of the big bathing days, and on the start of this festival, devotees gather at holy rivers or have a bath at home while fasting.

The Mela, also known as the Kihichari Mela lasts for an entire month. Occasionally, the Mela also is graced by a visit from the King of Nepal. Kite flying is an important part of this festival and sweets are aplenty. There are a number of shops with toys, sweets, jewellery, apparel and a host of other things at this fair, and the Mela is indeed a time of enjoyment and fun for people of all ages, backgrounds and cultures.

Location: The temple is situated in the Gorakhnath locality of the city and lies about 4 kilometers away from the railway station on National Highway 29A that connects to the border of Nepal.

Best Time To Visit: Throughout the year. Thursdays and Saturdays have increased activity and the prime time to visit would be either in the morning or in the evening during prayers. This place is one that should definitely be visited during the Makar Sankranti Mela from January 14 onwards.