Gorakhpur is a city of many attractions and has sights to enthrall people from all walks of life. With its history going back through different eras of time, this city boasts of attractions that preserve Indian culture and tradition as it was meant to me. Gorakhpur has a number of tourist attractions, and one such place is the Gita Press. 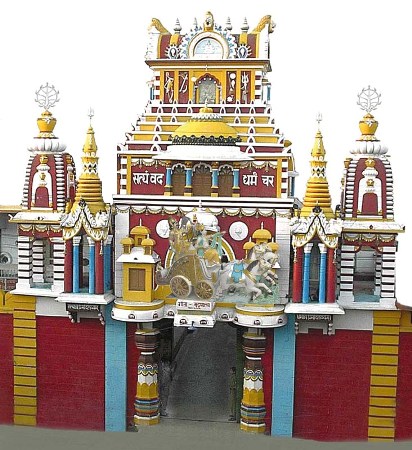 This press is the world's largest publishing house of Hindu religious texts and began its work of publishing in 1927, although it was conceptualized and founded in 1923. The primary purpose of its establishment was to promote the principles of Sanatana Dharma and publications printed here are circulated worldwide. The Gita Press is managed by the Governing Council which is a Trust Board, and its members support it out with non-financial interest. This press publishes the Hindu religious and discourses of prominent saints, apart from other publications that deal with character-building.

History of Gita Press in Gorakhpur

On April 29, 1923, a Gita preacher Brahmalina Shri Jayadayalji Gorandka had set up the Gita Press. It was founded as a unit of Gobind Bhawan Karyalaya and, with an investment of Rs. 600, got its first printing machine five months later. Since this time, this press has seen the publishing of over 410 million copies of different editions of the Gita. It has also produced 70 million copies of the Pamcharitamanas, which were made available to the public at lower costs.

The Gita Press publishes monthly magazines such as the English Kalyana-Kalpataru and Hindi Kalyan Masik. The house-magazine, Yug Kalyan, provides all that you would want to know about the latest releases as well as some well-written essays. There are no advertisements in the magazines produced here.

Apart from magazines, the Gita Press publishes different formats of the Bhagavad Gita, Mahabharata, Ramcharitmanas, Ramayana, Puranas, Upanishads as well as works by Tulsidas, Valmiki and Soordas. Bhajans and Bhakta-Gathas are also printed here, along with books for children.

This press publishes in a number of languages, including Sanskrit, English, Hindi, Tamil, Bangla, Gujarati, Oriya, Telegu, Marathi and Kannada.

Attractions of Gita Press in Gorakhpur

Each day at the Gita Press begins with a prayer in the morning. Several times a day, an assigned person travels through the premises to remind each worker of God. At the main gate of the Press is an inscription that reads Satyamvad Dharamamchar, which when translated, literally means "Speak truth and practice Dharma". A prominent attraction of the Gita Press is also a beautiful sculpture depicting Lord Krishna on a chariot, giving Arjun a sermon.

Further down into the premises is a superb hall that is home to the Lila Chitra Mandir, or the Art Gallery of the Gita Press. This is a pictorial portrayal of India over the ages and includes around 700 pictures and paintings. Along the walls of this gallery are all 700 verses of the Gita, fixed to the walls on marble plaques. Apart from its many attractions, the Mandir is brought to the fore during the week of Gita Jayanti, when it is adorned tastefully.