Gorakhpur is a small city in Uttar Pradesh that is known for its religious edifices, monuments as well as crafts that reflect its deep-rooted cultural and historic values. While still ages apart from metropolises and modern life, its economy still thrives without the aid of the IT industry or multinational companies that have made inroads into other cities. As it still does retain vestiges of the past, Gorakhpur also maintains its status quo with the rest of India by offering business opportunities that blend in with its long-held traditions.

Gorakhpur is predominantly a cultural and religious place that draws pilgrims and tourists to its famed monuments. Its natural beauty coupled with historic appeal is one reason why tourism is a major money-generator here. In order to support the booming tourism industry, there are a number of hotels and restaurants that have mushroomed throughout the city, providing Gorakhpur with the needed base to support tourism as well as develop itself. These hotels and restaurants cater to every budget and background, and provide additional tourist facilities for great comfort as well as revenue generation. The tourism and hospitality industries have shown massive increase in the recent past in comparison with most other industries in Gorakhpur economic structure.

The climate of Gorakhpur makes it ideal for agriculture, which has been the major source of income for the city and its surrounding regions. Apart from agriculture, there are a number of other industries that thrive here. The soil of Gorakhpur is rich in salt petre, kankar and brick clay. Since brick clay is abundant throughout the district, this region is known for producing bricks, thereby leading to the construction business thriving within and outside Gorakhpur.

Medical facilities in Gorakhpur are much better than in surrounding regions and towns and due to this there is quite an influx of people into the city in quest of these facilities. As a result of this, there is much income from the service industry which continues to grow with each passing year.

The banking sector has also stepped up activity in Gorakhpur. From 1906 when the Kayastha Bank was set up in Gorakhpur, many more private and nationalized banks have come up on the Bank Road of Gorakhpur city, as well as in other centers.

Gorakhpur is the headquarters of the North Eastern Railway and the railways are therefore a booming business. Combined with the tourism industry that sees millions of visitors each year, the railway industry mints money with its industries that maintain coaches, engines and wagons as well.

Markets and trade play a major role in the economy of Gorakhpur. There are a number of markets that are home to products specific to Gorakhpur and its surrounding regions. Home to handloom and terracotta products, manufacturing of traditional artefacts has become a thriving business opportunity in Gorakhpur. Many farmers are part of village home industries that are quite busy, especially during seasons where agricultural activity is not possible. 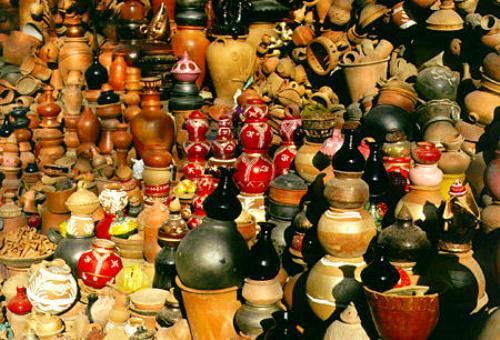 Small-scale industries play a major role in Gorakhpur’s economy with numerous manufacturing and industrial units dotting this region. There are numerous potential business opportunities for connoisseurs of art and culture with virtually all vestiges of Indian culture kept alive here. From hand-woven garments and linen to hand-made terracotta products and woven crafts, Gorakhpur attracts collectors of these artefacts from around the world. The government of Uttar Pradesh has been working extensively to promote the small scale industries and village industries in this region and draw more tourists and business people to boost its economy.

With the influx of a greater student population, associated services have begun to take firm hold in this city. The city has opened its doors to shopping malls, multiplexes, pubs and spas, which are also an added source of revenue to Gorakhpur’s coiffeurs. Many businessmen have observed the growth opportunities in this hitherto untapped part of the country, and have made a beeline to offer these services that would be acceptable to residents and visitors alike.